I haven’t written for a while, at least not a “real” post since last week Tuesday. A lot has been going on, and I have been trying to emotionally recover, and try to focus on God, which is really hard when I have been having trouble sleeping and have two cute kids running around. (and frustrating kids at times)

The biggest thing for me that happened this past week, was that in my counseling session, I think we finally broke through the whole memory of the rape I have been trying to deal with.

When we started the therapy, I was so shaky and scared to face it again. The image that was in my head was the after effects, when I was curled up in the bathroom. I was so hurt and the pain was pretty overwhelming in the session. As she stopped the therapy, I found myself curled up on her couch in the fetal position. I was shaking and I didn’t know how I was going to get through it. I was remembering the feelings of being so numb and cold and alone. Fearful of letting the guy know how I was feeling, so I couldn’t make a sound, didn’t dare even cry.

With Tricia, I was finally able to cry. We weren’t even doing the therapy. I was just sitting on the couch, between bits of the therapy, and I don’t even remember the line of thought we were pursuing. I started to cry, to weep, to mourn. I was glad, and I think so was Tricia, because when I started to cry and tried to control it, she reminded me that it was ok to cry, and to just let it come. She just allowed me the space and time to cry. It was a bit hard because I felt a bit self-conscious but the emotions were so overwhelming, that I couldn’t really stop them…. though I could have used a big hug at that point from someone!

I guess the most important thing that I wanted to share was what happened at the end of the session. We were back to the therapy, trying to help me overlay the truth that even though this awful thing happened to me, that I was still significant, worthy, and never left alone by God.

As I was going through it, and praying it through as well, I felt like God was asking me to let it all go… the pain, the memories, the wounding from it, and give it to Him.

Through the tears, I surrendered it all.

Yes, I am still hurting. Yes, it’s not completely healed yet, but it is another piece of my heart that He has taken from my hands. I had pulled it from the box, but was afraid to let it go, even though that shattered piece was cutting my hands to ribbons. I turned my hands over, and gave that piece of my heart to my God. I know that He is healing it back into my heart, and He is healing my hands that I wounded by hanging onto this for so long.

The other big thing that happened this week was my being the leader for one of the worship teams for the first time. Wednesday night rehearsal went well, though after the counseling session earlier that day, I cried all the way from home to church.

Sunday morning went well too. Not great, not PERFECT! It went all right. The things that happened that were so glaringly wrong to me, were largely unnoticed by the rest of the congregation.

The thing was, once I was done, there was an emotional let down. I expected that. I didn’t expect the weight, the depression, and the feeling of … I don’t even know what.

After talking with my friend, Cindy, I realized that some of it is probably that I have started a new ministry. Every time I have begun a new ministry, become involved in something that might have some sort of impact for God’s kingdom, well, I end up under some sort of spiritual attack. This time, I felt the pressure of not doing a good enough job, seeing all the things I did wrong. I started feeling like my abilities are not good enough. That I am unable to do the job I took on, and I shouldn’t keep on.

I feel like crying and that the “I am not good enough” thought permeates everything. Being a wife, being a mom, being a friend, being a homemaker, being a Christian. I know each day is full of it’s own challenges. I know that God is with me and helping me. I know it. I am trying to cling to that truth that He will never leave me nor forsake me. No matter what my feelings might be telling me.

So the after effects of some victories, is a down swing to the valley. Some more struggling with depression. Like my friend Amy said on a recent post, depression is a thief that comes in to steal away our “energy, enthusiasm, joy self-confidence.” I don’t want it to steal away my time with my kids, when I could be playing and enjoying our time together.

I know the best way to battle the depression is to act on the truth that I know. God has given me nothing more than I can bear. He is with me. He is my strength, my song and my hope. I am going to choose to cling to him, and wring as much joy out of this day as I can.
Even when that includes changing stinky diapers, diaper pails, cat litter, breaking up fights, and trying to find SOMETHING to do with the kids on this cold, cloudy day!


****** NOTE: This seems to relate to the “Yes to God Tuesdays” Ms. Perfection chapter that is due today. As I need to get to the kids for now, I will be posting later on today… it will probably add to these thoughts…
Posted by Heather - On the Road... 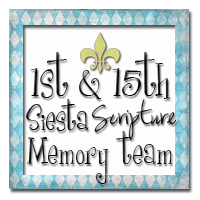